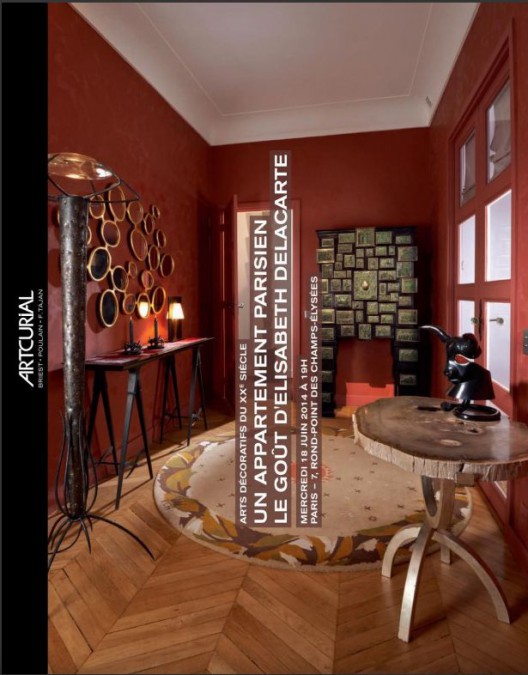 The Artcurial sale of the private collection of Elisabeth Delacarte in June 2014 «A PARISIAN APARTMENT, THE TASTE OF ELISABETH DELACARTE»

As pointed out by the auctioneer Maître Poulain in the introduction to this sale "The "Baroque" line of design has acquired its prestige thanks to Elisabeth Delacarte". Indeed, under the hammer of Maître Poulain, Artcurial has dispersed the interior of the Parisian apartment of the gallerist Elisabeth Delacarte. This "collectible sale" has reached the total of € 915,330 / $ 1,246,405, tripling its estimate. In a full room, all the lots were sold. The bidders were particularly numerous on the telephone: 65% of the lots were sold to international customers, 2/3 to Anglo-Saxon buyers. Several lots were particularly contested, with 70% of the lots being awarded above their estimate. This is the case for example for Hubert Le Gall's "Mulux" mirror (lot 25) that has multiplied by five his estimate, or the fireplace set "Leaf" by Franck Evennou (lot 4) which sold for 19 500 € fees included (estimate: 2,000 - 3,000 €). The success of this sale confirms the enthusiasm for a French production of the 80s, rare in the art market, and pays tribute to the work done by Elisabeth Delacarte in the past 30 years of her gallery Avant-Scène.

Emmanuel Berard, Head of Artcurial's Design Department, said: "Solidly established as the key player in the market for Design, Artcurial does not hesitate to give in to its natural curiosity. The success of the sale of Elisabeth Delacarte's Interior has proved our ability to mobilize many customers on creations of artists previously rarely presented on the market who, on this occasion, broke new records. Artcurial obtains the world record for a piece of furniture by Hubert Le Gall at auction, but also for Franck Evennou and Alexis de la Falaise. "